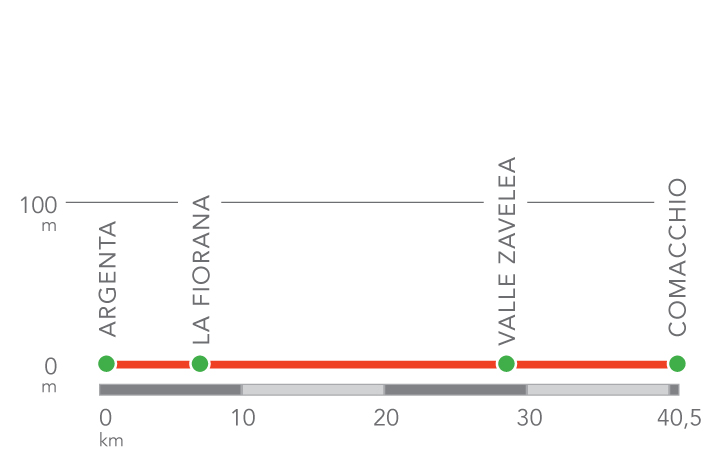 Rich in museums and testimonies of territories and civilizations – such as the Museo delle Valli (The Valley Museum) -, Argenta offers varied landscapes marked by quiet riverbanks and freshwater valleys. Waters in the Comacchio valleys instead are salty, and can be reached with quiet relaxing bike rides through the countryside, leading to an encounter with the flourishing avifauna of the Delta: among others red herons and pink flamingoes can be spotted.

Not to be missed:
from the small watchtower in Valle Zevelea a vast panoramic view covering all of the Comacchio Valleys, with their hypnotic geometries of lakes mirroring the sky.

1 - Val Campotto Oasis
Campotto Valleys are what remains of the ancient Valleys of Argenta and Marmorta and they started forming in the XII century, when the Po river in Primaro by then shallow and cluttered with sediments, could no longer receive waters from the several appenine streams converging there.
Find out more

2 - The Argenta Valley Museum
The logistic cornerstone of the Ecomuseum and one of the Environmental Education centres in the Emilia Romagna region.
Find out more

3 - Argenta’s Ecomuseum
The Ecomuseum is the fruit of an agreement between the Municipality of Argenta, the consorzio della Bonifica Renana(Consortium for Land reclamation of the Reno river), promoter of the water regulation system, and the Po Delta Park, in charge of guidance functions and scientific research, management and environmental enhancement of this territory. The ecomuseal system of Argenta is structured around three museum facilities: the Valli di Argenta Museum, the Museum of Land reclamation and the Civic Museum.
Find out more

4 - Museo della Bonifica
The Museum of industrial archaeology placed in a context of liberty-style buildings and comprises the large Drainage system in Saiarino and the old Thermal power plant for the transformation and production of electricity.
Find out more

5 - Pieve di S. Giorgio
The parish Church dates back to 569 and was built according to a will of Archbishop Agnello from Ravenna. The first settlement in Argenta developed around it. The mosaics and the archaeological remains of the Parish are reproduced in copies in the atrium of the Valli Museum and conserved in the Civic Museum of Argenta.
Find out more

6 - The Municipal Museum in Argenta
The archaeological section is dedicated to recent discoveries in the territory of Argenta. Archaeological finds cover a time span from VI to XVII century and come from the Parish of St. George, the lacustrine settlements of Palmanova and the workshops in the town centre.
Find out more

7 - The Bando Oasis and the Anse Vallive di Porto
Stretching over 50 hectares, they are formed by freshwater basins and cane fields and represent a place of fundamental importance for the conservation of water birds.
Find out more

8 - The Wine and Dine route in Ferrara
A succession of foggy cultivated crop fields, rice fields and watercourses, brackish valleys and overtowering buildings from the Estense family period, are the frame to wine-growing and farming production, agri-food activities and enogastronomic specialities. Typical products and services from the territory of Ferrara, in the framework of an eco-compatible economy.
Find out more

9 - Comacchio
Capital of the Po Delta Park. Founded on thirteen small islands, Comacchio is an enchanting lake town: it is graceful and genuine, endowed with a vitality which is nurtured by respect for its own history and a will to enhance it. Not to be missed: St. Cassiano’s Cathedral, Trepponti (Symbol of the town)
Find out more

10 - Museo della Nave Romana
The museum dedicated to a Roman ship found in 1981 in the area of Valle Ponti, a few kilometres from Comacchio, is housed in a building within the Palazzo Bellini complex.
Find out more

11 - Manifattura dei Marinati
A cultural and enogastronomic site, where there is also a Visitors Centre at the Delta del Po Park. Here the whole processing cycle of anchovies can be viewed, smelt fish and above all eels, the culinary icon of Comacchio.
Find out more

12 - Valli Comacchio
Lagoon and marsh area stretching over more than 13,000 acres, from Comacchio to the Reno river. In ancient times these Valleys were filled with fresh water, but were gradually filled by sea water, defining the landscape of the saline water valleys that they still maintain today.
Find out more