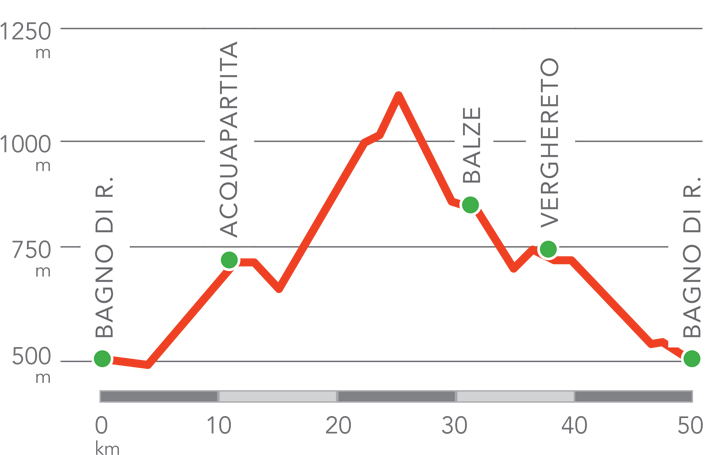 A panoramic itinerary, in the area where three regions meet: Emilia Romagna, Tuscany and Marche. Amid ridges and beech woods, along the slopes of Mount Fumaiolo, we will go past the springs of the Tevere river, which after 4 kilometres in the territory of Romagna crosses Tuscany, Umbria and Latium to flow into the Tyrrhenian Sea, after a route of 406 kilometres.

Not to be missed:
though travelling on asphalted roads, the route mostly covers wild environments and luxuriant nature.

1 - Palazzo del Capitano (the Captain’s Palace)
Testimony of the long florentine domination, which marked this border territory from 1404 to 1923. It is the seat of the Visitors Centre of the Foreste Casentinesi Park”.
Find out more

2 - Foreste Casentinesi National Park
One of the most impressive forest complexes in Europe, dotted with ancient roads which connect northern and central Italy.
Find out more

3 - Lake Acquapartita
Endowed with quality fish fauna, it is the preferred destination for sport fishermen and excursionists heading for the woods in Mount Còmero.
Find out more

4 - Alfero Waterfalls
Scenographic 32-metre high cascade also called the Trouts Cascade, due to the abundance of fish in its waters.
Find out more

5 - Springs of the Tevere river
This is where is where the main river in central Italy originates, closely intertwined with the history of Rome, which it crosses before flowing into the Thyrrenian Sea. For hundreds of years it has been an important trade route (via di comunicazione commerciale) until the early 1900.
Find out more

6 - the Primitivo Apiculture
Production of various types of honey, liquors and chocolate through a strictly artisanal processing.
Find out more

7 - Natural thermal baths
The thermal waters of Bagno di Romagna have been renowned since Roman times, their origins being considered of divine origin. The fruit of a particular geothermiacal process, three thermal establishments are supplied by these waters.
Find out more