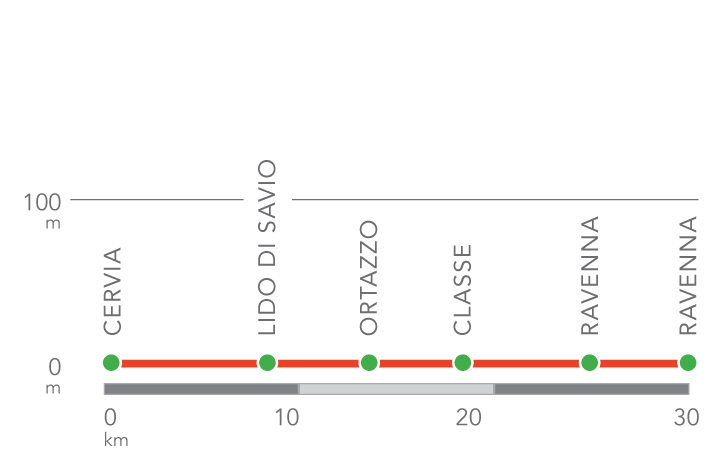 From ancient salt town to Byzantine capital, an itinerary through nature to discover the most famous mosaic site in the world going through its millenary pinewoods and the Ortazzo and Ortazzino Natural Reserve, the place with the highest biodiversity rate on the coastline in Romagna. After your arrival in the town an urban route will be proposed to discover the most representative mosaic sites. From Ravenna to Cervia with the possibility to return by train.

Not to be missed:
from Cervia, a route along a nature path, without cars or traffic, arrives at the Basilica di Classe, one of Unesco’s heritage sites and most visited artistic site in Emilia Romagna in 2015.

1 - Salt Museum
A small yet great museum where images and stories about salters, take us inside adventure and the magic of the salt civilization.
Find out more

2 - Salt Warehouses
Overlooking the salt mine canal, the Salt Warehouse represents an example of industrial archeology on the territory. Built between 1691 and 1712, used to ensure the storage of salt produced in the nearby salt mines.
Find out more

3 - Cervia Saltpans (detour)
Cervia Saltpans, South Gate of the Po Delta Park and Nature Reserve, have always been the nesting area for many species of animals and plants. Here, thanks to the sun, the wind and decanting time, the famous swet salt of Cervia is generated.
Find out more

4 - Pinewood in Cervia
In ancient times it was part of a vast woodland area stretching from south of the Reno river to the town in Cervia. Apart from pinetrees – the dominating species - it hosts bushes, hedges and maquis.
Find out more

5 - Ortazzo and Ortazzino Natural Reserve
A place of great interest on the edge of the millenary Pinewoods in Classe, it is one of the wildest environments, with the most remarkable naturalistic value on the entire Adriatic coast.
Find out more

6 - The Basilica of Sant’Apollinare in Classe
Together with the adjacent archaeological area, it bears witness to what used to be the military port in Ravenna in the Augustan era. Mosaic decors in the apse – among the best renowned in the world – date back to different ages, from the 6th to 12th century.
Find out more

7 - The Neonian Baptistery
The most ancient monumental work in the town of Ravenna and the best conserved baptistery in the history of primitive Christianity.
Find out more

8 - The Domus of the Stone Carpets
A recent archaeological site, it used to be a lordly Byzantine palace and is structured in fourteen rooms and three courtyards entirely decorated with wonderful mosaics and marble inlays. The fourteen mosaic floorings are decorated with geometric, vegetal and figurative elements, for an overall area of 700 sq m.
Find out more

9 - The Basilica of San Vitale and the Mausoleum of Galla Placidia
These two adjacent sites represent two treasure chests which enshrine the highest expressions of Byzantine mosaic art.
Find out more

10 - The Arian Baptistery
Architecturally similar to the Neonian Baptistery, it was built in the first half of the 6th century, during the dominion of Theodoric, and the establishing of the Arian religion.
Find out more