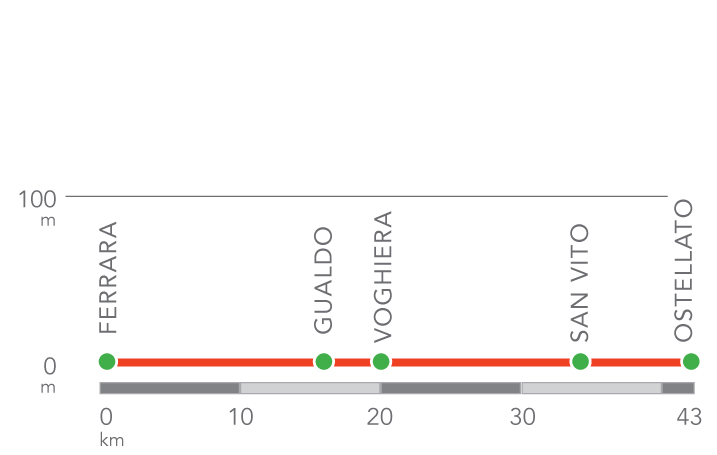 The countryside in Ferrara following the course of the Po di Volano river, encountering two Delizie (villas) of the Estense family, which surprise you for their isolated position in the countryside: an easy route. Monumental dwellings stating the greatness of the Estense dynasty. The itinerary ends with a dive into the unique nature of the Vallette Oasis, a Centre for Visits to the Po Delta Park.

Not to be missed:
Ferrara is the “Italian town for bicycles”, where their use on the part of citizens is among the highest in Europe. And not only the town, but the whole province is dotted with a network of perfectly equipped and signalled paths.

1 - The Estense Castle
The town’s icon, it has been a landmark in the history of Ferrara since 1385, when it was built as a military tower.
Find out more

2 - the Cathedral square
The town centre, lined with Renaissance buildings which make Ferrara one of the Unesco World Heritage Sites.
Find out more

3 - Walls
Nine kilometres of fortifications built in the Middle Ages, surrounding the town.
Find out more

4 - Roman Necropolis of Voghenza
Sepulchral and monumental Area which formed part of an ancient roman settlement.
Find out more

5 - Aglio di Voghiera DOP
Starting from the Middle Ages the Este family promoted horticulture in this area, in particular the production of lettuce and aromatic plants, among which garlic
Find out more

6 - Belriguardo Delight
Defined as the Este’s Versailles, it was used as a summer residence for the court and as representative villa. Lucrezia Borgia often stayed here.
Find out more


7 - Portomaggiore (detour)
The first news about Portomaggiore date back to 890 A.D.: the place name, Portus Maius, suggests that the town was the most important trading port in the continuous transforming river Po area. Portomaggiore has expanded during the centuries. Heritage of Estense family are local hydraulic works and the “ Delizie” villas as the Verginese villa.
Find out more


8 - the Delizia del Verginese
It was built to be used as a simple home dairy, next to the Primaro and the Sillaro rivers, at the end of the 15th century and could therefore be reached by water from Ferrara.
Find out more


9 - Ferrara food and wine trails
A succession of foggy cultivated crop fields, rice fields and watercourses, brackish valleys and overtowering buildings from the Este family period, are the frame to wine-growing and farming production, agri-food activities and enogastronomic specialities. Typical products and services from the territory of Ferrara, in the framework of an eco-compatible economy.
Find out more


10 - Anse Vallive di Ostellato marshes
An oasis for the protection of local fauna, a special and unique biotype freshwater wetland on the territory, especially for the quantity and variety of animals inhabitating it.
Find out more