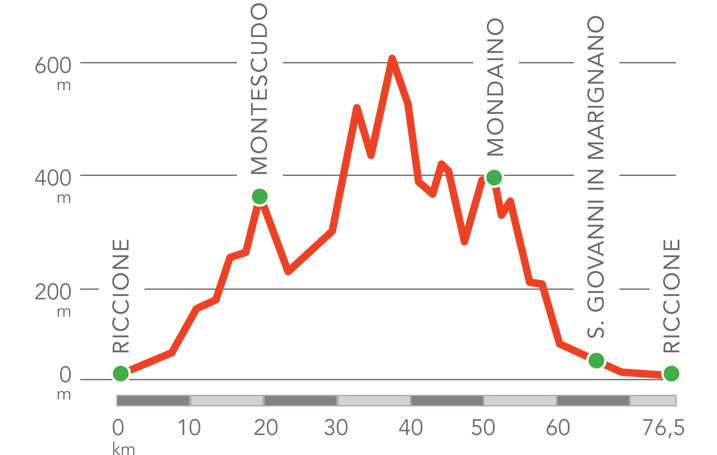 After an initial taste of the sea – with the route running alongside the backshore -, it advances rapidly through the valley between the Conca and the Marano rivers, on a border territory once militarly strategic and thus extremely sought-after. The uphills in the Valconca are really close to the Riviera and require swift and well-trained legs, but this luxurious valley rich in testimonies from the past is the ideal gym for active discoveries on a bycicle.

Not to be missed:
between Montefeltro and Valconca, a succession of medieval hamlets still inhabited, where history and traditions are still present and alive.

1 - Forest of the Rain Fountain
Built by Tonino Guerra in 2000, it was created to invoke rainfall and the coolness rain brings.
Find out more

2 - Villa Mussolini
Purchased in 1934 by Donna Rachele Guidi Mussolini, the villa became a sort of summer annex of Palazzo Venezia. This is where nobles, entrepreneurs, Italian and foreign politicians, like Senator Borsalino from the homonimous hat factory or Chancellor Dollfuss and his family used to gather.
Find out more

3 - Coriano
After a noble past marked by presence of the Malatesta and Borgia families (7 castles present on the territory bear witness to this) Coriano returned to the limelight as a strategic point on the Gothic line and the stage of fierce battles. In memory of this the English war Cemetery, one of the largest in Italy hosts the remains of 1496 soldiers from the English VIII army , who died in the inland of Coriano during the second world war, at the time of the breaking down of the Gothic Line. Post-war reconstruction is symbolized by the building of the imposing Church of St. Maria Assunta, visible from every point of the municipal territory.
Find out more

4 - Montescudo
An extremely ancient and strategic hamlet, litigated by the Montefeltro and the Malatesta families, which conserves a series of rarities among which a cold storage room from the Malatesta period. In the vicinity there is the Eastern Gothic Line Museum and the wooded area of Albereto, rich in rare plants and a unique environment at this altitude.
Find out more

5 - Didactic vineyard
The Vineyard can be visited inside the Fiammetta farmtouring house, where over 200 vines coming from all over the world have been planted.
Find out more

6 - Mondaino
An ancient Roman military outpost,its landmark is Piazza Maggiore, one of the most characteristic and beautiful squares in Romagna with its unusual semi-circular shape. The village is famous for the Palio del Daino, a historical medieval reenactment rich in settings.
Find out more

7 - Saludecio
The distintive feature of this medieval hamlet is its refined architectural elegance. In the surroundings, the uncontaminated environment, has favoured the growth of a "Study Centre for herbalism and medicinal plants”, rich in initiatives and enogastronomic events.
Find out more

8 - Wine and taste Colli di Rimini
It gathers together olive mills, wine producers, wine cellars, farmhouses, restaurants, artisan shops, public institutions and trade associations, a route along the beaches on the Adriatic coast to the historical towns in the Conca and Marecchia valleys.
Find out more