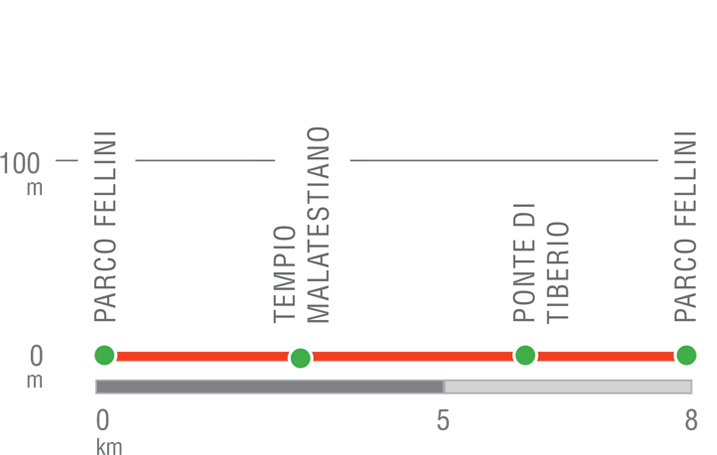 A tour in the past and recent history of Rimini, along the landmarks of the town, connected between them by parks and green areas bordering the historical centre. A stroll that is a historical and cultural rivisitation to be carried out step by step, with the accent on “green”.

NOT TO BE MISSED:
the rigorous and austere Malatesta Temple and the picturesque Pescheria Vecchia (the Old Fish Market), a unique contrast between two buildings situated at a few metres distance from one another.

1 - the Roman Amphitheatre
Erected during the 2nd century AD and mainly used for gladiator games, it marked a step forward in the city’s “ranking”.
Find out more

2 - Arch of Augustus
An icon of the Roman period in Rimini, it was the ancient town gate.
Find out more

3 - The Malatesta Temple
This shrine of Renaissance architecture built by Leon Battista Alberti, contains works by Giotto, Piero della Francesca and other Italian artists from the 15th century.
Find out more
Video

4 - the Pescheria Vecchia (the Old Fish Market)
Built in 1747, presents itself as an open gallery with two arcades (loggiato a due organi). On its corners, the four small dolphin statues with jets sprouting water used to be fountains for cleaning fish.
Find out more

5 - the Sismondo Castle
An impressive building, with its large square towers and powerful sloping walls. Sigismondo Malatesta died here in 1468.
Find out more

6 - the Tiberius Bridge
Completed in 21 AD and starting point of the ancient Via Emilia, it still enables the crossing of the Marecchia river, the ancient Ariminum which gave its name to the town.
Find out more

7 - the Surgeon’s House
A vast archaelogical complex dating back to the Roman period, where sculptures, decorations and technical instruments belonging to an important doctor from the 2nd century AD have been brought to light.
Find out more
Video