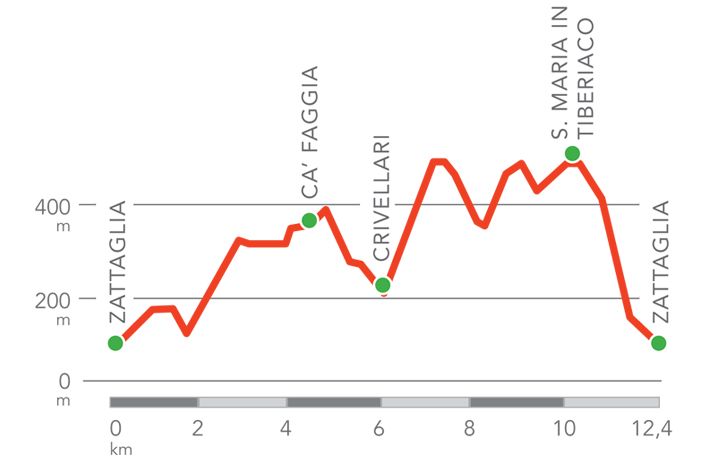 Mount Mauro is the highest peak in the Gypsum Vein Park and is surrounded by the spectacular crests this itinerary winds through, enabling you to discover all the significant aspects of the Park. From here on clear days the view reaches out to the sea, while to the south, the Sintria and Senio valleys, appear to be decorated as in a palette , by vineyards , orchards and pastures separated by maquis and bushes. Walking on the “Gypsum crest”, between April and May you can admire the wonderful blossoming of wild orchids.

Not to be missed:
from one panorama to another, along the route roman lapis specularis mines can be encountered, dating back to the I and II century A.D.., for the extraction of shiny and precious secondary gyspum crystals, used instead of glass to build windows in the Imperial age.

1 - Cheilanthes persica
This extremely rare plant (which only grows there in Italy) is the botanic emblem of the Park. It grows on the most inaccessibile crags, together with other species suitable for arid and inhospitable environments, in particular on gypsum crags exposed to the south.

2 - The Gypsum Vein Regional park
A spectacular silvery grey ridge interrupting the first gentle hill contours conferring a unique aspect to the landscape. The Romagnola Gypsum Vein is the only entirely gypsum geological formation in Europe.
Find out more

3 - Lapis Specularis
Lapis specularis is a secondary gypsum, with large transparent crystals, easily divided into flat sheets. Nicknamed “the stone glass ”, starting from Roman Age it has been used as a transparent element for windows.
Find out more

4 - The Crivellari hamlet
The ancient and pictureseque hamlet entirely made on and of gypsum is one concrete example of how man and nature are intimately connected in this territory and is an authentic and unique testimony of gypsum culture and civilization, with its original houses built with gypsum and fern and dating back to the XIII century. Once highly inhabited, today it is inhabited by only a few families.

5 - The Bandit Cave
A small cave of great archaeological interest. It dates back to the ancient bronze age - XXIII-XVIII century. B.C.- and was used for funerary rites. This is where ceramic fragments have been found of food containers and special earthenware colanders. In more recent times it has also been used by shepherds as a shelter during temporary transfers, and its name derives from legends and stories narrated in this territory.

6 - Mount Mauro
It is the highest peak in the Gypsum Vein (515 slm) and its profile stands out unmistakably compared to the surrounding hills in the Sintria valley. It houses some ruins and the remains of an acient castle and a recently renovated Church, the Parish of St .Mary in Tiberiaci dating back to before the year one Thousand.

7 - Shallots from Romagna PGI
Onion bulbs, cultivated on these hilly soils that tend to be of clayey. The bulbs are tasty, aromatic and delicate, and can guarantee a unique and special gastronomic role to products.
Find out more

9 - The Regional Speleological Federation of Emilia-Romagna.
A federation gathering together all the speleological groups in the Region, particularly active in the Gypsum Vein, which is the most important karstic site in Emilia-Romagna. It is actively committed to the spreading of the world of Gypsum Vein caves. The hypogeum is not only rich and complex but it is also an essential part of the mountain and its territory.
Find out more